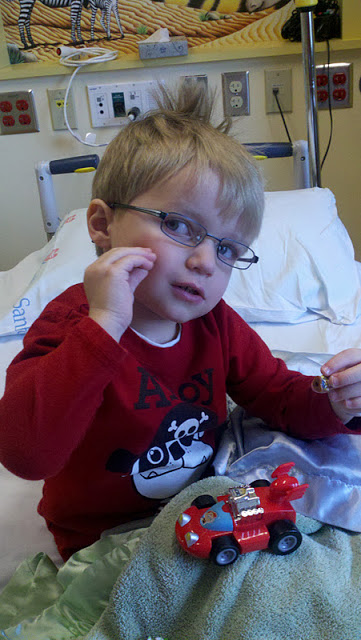 Written by his mom, Jennie Howard.

“On 11/11/11, we took our son, Sammie, to the eye Dr. for a wandering eye. I had prepared myself that we were going to leave with a patch. Not having a clue what was coming. We took all 3 boys with us and ended up being there almost 2 hours. We left uneasy. With one of two things. Either Sam had Coats Disease or Retinoblastoma cancer. Talk about a heavy heart. We couldn’t get into see the specialist until the next week {5 days} who then told us he would need to do a more thorough exam under anesthesia and Sam would need an MRI to rule out the cancer. This all took place the day after Thanksgiving. So much to be thankful for that year.

After the exam and MRI, we were told it was NOT cancer, but he had stage 3a of Coats Disease. He said it was pretty advanced and since it was such a rare disease, he had never treated it before, and only seen a very mild case of it. Unfortunately there is not a specialist in our area. So we were referred to Dr. Polly Quiram in Minneapolis Minnesota, a short 4 hours from home. Sam had his first surgery on 12/12/11. Dr. Quiram told us his retina was 75% detached and there was quite a bit of leakage in his eye. He had cryo done on some of his leaking vessels, and got Avastin to hopefully help stop the growth of new blood vessels. She wanted to see him again in 4 weeks. 4 short weeks. So, we traveled in a blizzard to Minneapolis with our 3 boys for Sam to have his second surgery.

That was a year ago. Sam was just barely 3 years old. He has had 7 surgeries in the past year. But I think we are on the up and up! He hates having surgery. The bad part about it now, is that he knows what to expect. He knows that he is going to get the mask to put him to sleep, he knows that he is going to have to get multiple sets of eye drops. His last surgery was on January 21st.

Dr. Quiram said Sam’s eye has never looked better!! No new leakage and she didn’t want to see him again fro 4 months! That’s the longest we have ever gone! We are so happy to finally feel like we are winning against this awful disease.

We still aren’t sure what Sam can really see. He says sometimes he can see and other times he can’t. I guess since he’s only four and probably doesn’t know any different it’s just normal to him. He is such a brave little boy and we love him so much!”