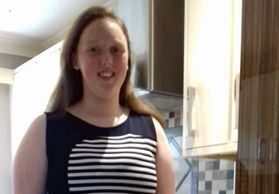 My name is Francesca Mulhall and I have Coats’ Disease. When I was 10 years old, I noticed there was something wrong with my left eye. At first I thought nothing of it until I saw it again. I knew something was wrong. I was going blind in my eye. I had said it to my mother and she laughed at me, thinking I was only messing that my eye sight was going. I thought it might just go. Months go by and I then remember about it, checked it and it was still there. I said it again to my mam. She still didn’t believe me.

Then, in school, an Optician came in to check everyone’s eyes. I told her about not being able to see in my eye. She said not to worry about it for now cause we are going to check the right eye first. My class laughed at me. I was used to it cause I was bullied all my school life cause I have a learning disability. My right eye was grand, but then I put the patch on my right eye. It was black. I told her I couldn’t see the letters on the screen. She tried more tests with my eye. Still the same. She gave a letter to me to bring home to get my eye tested. After that, my mam knew something was up. I was 11 then.

I went for my first eye appointment at the age of 12. They couldn’t figure out what was wrong with me. I was sent to loads of places to check my eye. They didn’t know what was wrong with me. It was really starting to bother me. Then I was sent to Temple Street Children’s Hospital to a specialist. He sent me over to another hospital for a test called the dye test to look in the back of the eye. Two weeks after the test I was back in Temple street. The doctor talked to my mam and told her my diagnosis. Three months before my 13th birthday, I was diagnosed with Coats’ Disease. It was a relief to finally know there was actually something wrong with my eye.

Since then, I have had three laser eye treatments. Before the surgeries I never suffered from eye pains and now nearly every day I suffer with pains. I’m waiting for my next appointment but I haven’t had one in nearly two years. I hate the wait beccause the pains can last up to 2 to 3 minutes. One day the pain in my eye lasted for one whole day until I went to bed. The pain mostly happens during the day but never at night.