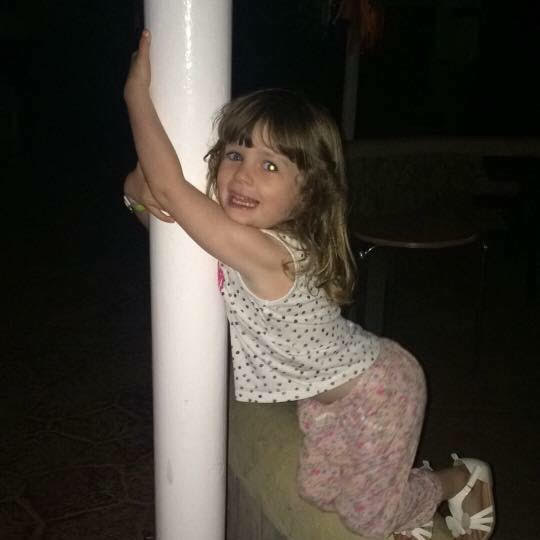 In May 2017, my son (age 7) was due for a checkup at the optician. While there, I asked the optician if it would be worth getting my daughter Eva’s (age 3) eyes tested. I thought if she needed glasses and figured it would be better if she had them early on. The optician said that would be a good idea and booked us in for the following week. One week later, during the eye test, the optician discovered that Eva’s right eye had perfect vision while her left seemed to have very little. After initially allowing us to pick glasses just in case, he then took us back in for the eye health test. This is where he discovered that her retina was detached. He explained what this meant and what part of the eye it was, then called the hospital’s eye department to discuss. We were then told that an urgent appointment had been booked for the next day at the eye clinic and that we could be there for most of the day while they ran different tests. He also spoke to us about the likeliness that her vision would be mostly gone at this point but that it would be confirmed during our hospital appointment. The next day, it was confirmed that the retina was completely detached and the consultant said he wasn’t overly suspicious that it would be retinoblastoma and could potentially be a condition called Coats’ Disease. Referral down to Birmingham’s children’s hospital was then arranged ASAP. At this appointment, the consultant asked if we’d noticed anything different in photos so we checked as many as we could! We couldn’t believe it when we came across 3 photos spread out over the course of 6 months of Eva with a white/yellow eye instead of a red eye with the flash! How had we not noticed this as a sign?! Even a recent CT scan after a bad bump to the head had picked up the abnormality but the doctors hadn’t been looking for eye problems, just a head injury, so it was completely missed!

So, by the end of June, we traveled from Aberdeen down to Birmingham where Eva was put under anesthesia. Afterwards, Mr Parakular, the specialist, confirmed that Eva indeed had Coats’ Disease. He explained there was some leaking of the vessels and that he would arrange for Eva to come back down again to have it lasered. So that happened in the July. Since then, she’s also had cryotherapy (freezing treatment) which caused quite a lot of inflammation following the procedure and she now has a membrane which makes the eye look different from the other. We’ve been told that this could possibly be removed at a later date, but to do so without need could cause her more discomfort, which we would like to avoid.

Eva has a normal life, like all Coats’ kids… isn’t any more clumsy or accident-prone than a normal 5-year- old! She started school in August this year and has had a vision support teacher keeping an ‘eye’ on her on a termly basis for the last year, which was a referral from the consultant. Although she doesn’t appear to require any support at this time, there are many options available should she need support in the future which is great! She is so funny and loving and loves to perform! We certainly don’t see anything holding her back!