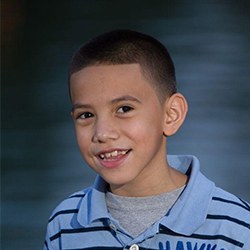 “God bless moms for their God given intuition for it was my mom, whom, when my baby was around one, first noticed something was not “normal” with his left eye. She told me that if I observed him closely that I would notice his left eye involuntarily wander, or, that he might have a condition that we know as lazy eye. I’m not quite sure if it was my state of denial at the time, but it took me quite some time before I actually saw it happen with my own eyes.

My name is Paola and very similar to the other stories that I have read here, I am privileged to share with you, our story, my son’s story, Christian’s story.

It was not until after months of waiting to see the retinal specialist in Phoenix Children’s Hospital, and after more tests and more waiting that the true diagnosis was rendered. The retinal specialist submitted the test results to the ophthalmologist and it was he who delivered the news that my precious son had Coats disease. After we thought that we were finally over the stress of Christian’s difficult delivery having been born with the umbilical cord wrapped around his neck that we were then faced with the challenges and uncertainties of this condition that no-one, not even the doctors seemed to know much about.

We were told that nothing could be done for him, given that he was still too young to express any discomfort or symptoms; that we would have to wait until he was at least four years old and or until he had the ability to express himself; that until then, all that we could hope for was esthetic surgery to correct his lazy eye and that even this would not be permanent.

Today my son Christian is a healthy, happy, fun loving and intelligent boy whom participates in the APEX program for gifted children at his school because he is above his academic level; yes who would have thought that he is all of these things in spite of the fact that when he was only one year and six months old he was misdiagnosed with cancerous growths in his left eye by his pediatrician who stated that these would eventually spread to his right eye and then to his brain as well.

Yes, the doctor’s prognosis for my son at that time was that of no hope for his future. But I believe that with the sharing of knowledge, the support of foundations such as the Jack McGovern Coats Disease Foundation and the creation of awareness via forums like Facebook that we will all see hope in our children’s futures.”