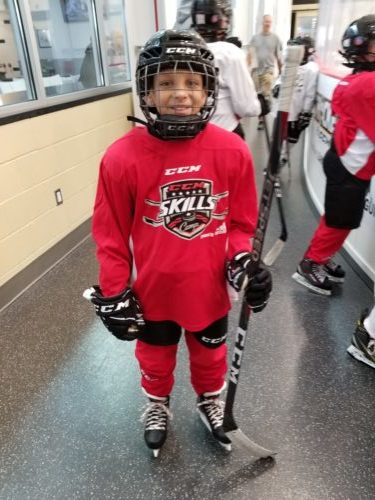 My son Braeden failed his eye screening in kindergarten. We took him to get his eyes rechecked and was told he just needed glasses. Then, in first grade, he failed his screening again. This time I took him to a different eye doctor. She noticed that he was colorblind in one eye. I was told that was not a common occurrence, so we were referred to an ophthalmologist.

It felt like an eternity to get into that appointment. I knew there was something wrong and all I could do was cry every day that we waited. Finally, we got to see the doctor and we were then told we might need to go to the hospital for a scan. At this time, we were also referred to our amazing retina specialist. He saw my son that day and he knew exactly what was going on. My son had Coats’ Disease and his retina was detached. All I wanted to do was make sure my baby was ok, but I felt helpless.

Braeden’s surgery was scheduled for that same week. The surgery went well but his pressure wasn’t going down as quick they thought it would. Eventually it did. The following year he had to have a cataract removed which was caused by the steroid that had been injected during his first surgery. He also had a lens implant at this time.

Here we are now, Braeden is in 5th grade and he has just been cleared for another year. His retina is still attached and there are no signs anything active. He doesn’t let it hold him back from doing anything!