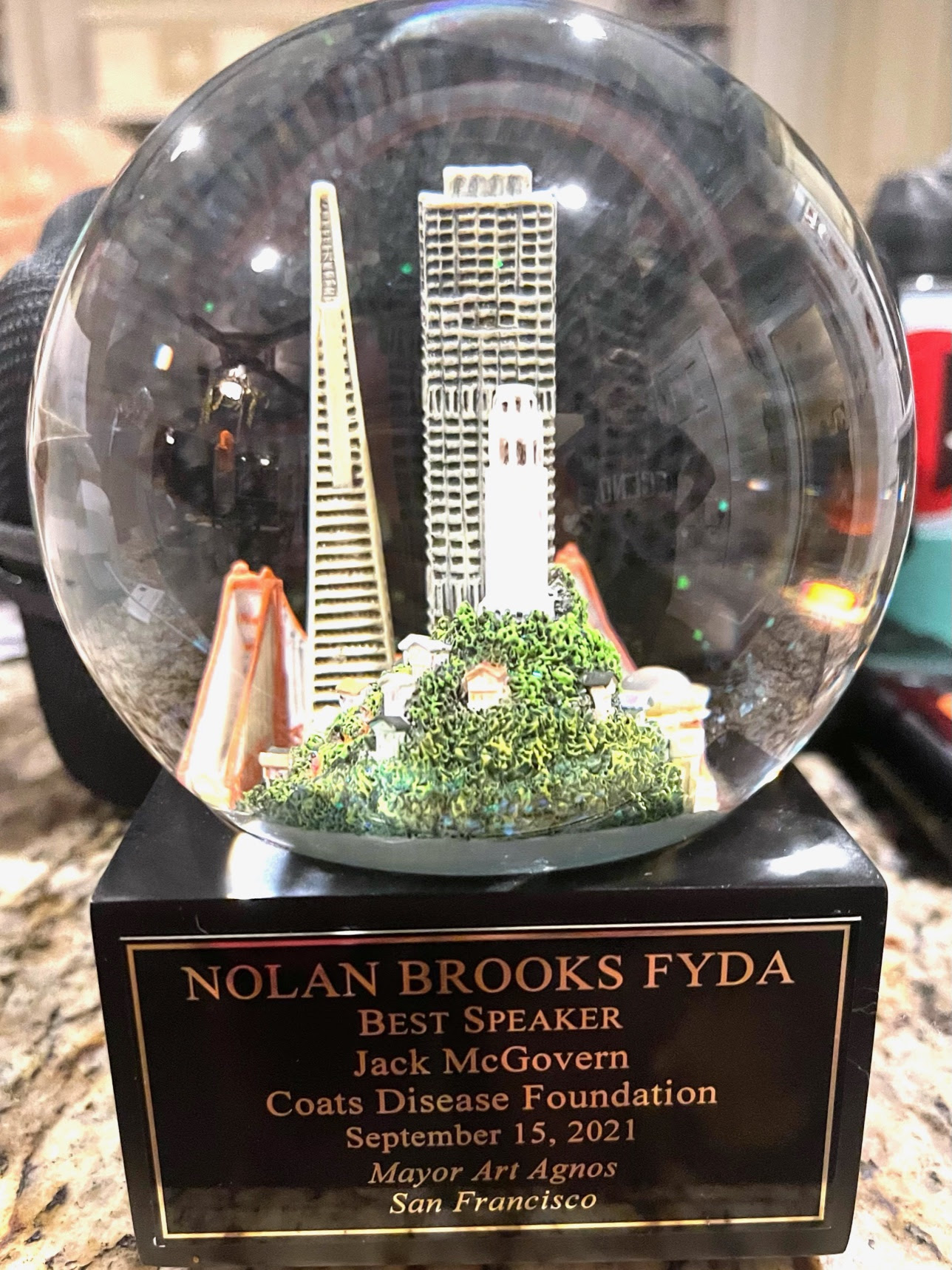 𝘈 𝘊𝘰𝘢𝘵𝘴’ 𝘋𝘪𝘴𝘦𝘢𝘴𝘦 𝘱𝘢𝘵𝘪𝘦𝘯𝘵 𝘢𝘯𝘥 𝘵𝘩𝘦 𝘍𝘰𝘳𝘮𝘦𝘳 𝘔𝘢𝘺𝘰𝘳 𝘰𝘧 𝘚𝘢𝘯 𝘍𝘳𝘢𝘯𝘤𝘪𝘴𝘤𝘰 𝘧𝘰𝘳𝘮 𝘢 𝘣𝘰𝘯𝘥 𝘵𝘩𝘢𝘵 𝘨𝘰𝘦𝘴 𝘣𝘦𝘺𝘰𝘯𝘥 𝘵𝘩𝘦𝘪𝘳 𝘪𝘯𝘪𝘵𝘪𝘢𝘭 𝘮𝘦𝘦𝘵𝘪𝘯𝘨.
On September 15, 2021, at the 15th Annual Jack McGovern Coats’ Disease Foundation Golf Tournament fundraiser in Burlingame, CA, Coats’ patient Nolan Fyda met several fellow Coats’ patients: Jack McGovern, Darius Souza, and Ryan Stach. He also met former San Francisco Mayor, Art Agnos, who is a long-time supporter of the Foundation’s work to find a cure.
Nolan, 11, who was diagnosed with Coats’ Disease in June of 2020, was a featured speaker at the reception following the golf tournament. Former Mayor Agnos complimented Nolan on his inspirational speech about his life with Coats’ Disease and gave Nolan his business card. Nolan and his parents, Kate and Matt, had traveled to San Francisco from Texas just for this event. This was their first visit to the Bay Area and they spent several enjoyable days exploring the city, collecting souvenirs along the way.
Unfortunately, while they stopped for lunch on the way to the airport for their return flight, their car window was smashed and their luggage was stolen. Nolan was very upset that his souvenirs, iPad, school computer, and other items were taken.
But, of all those stolen items, Nolan was most upset about a single business card – from Former Mayor Art Agnos. To Nolan, this was a very special keepsake and he was devastated that it was gone.
In an effort to put a smile back on his face, Nolan’s mother, Kate, reached out to Foundation co-founder, Ed McGovern. Ed quickly contacted Mr. Agnos to let him know what had happened and to request another business card. But, instead of simply sending Nolan a replacement card, Art went above and beyond to surprise Nolan with an engraved water globe of San Francisco!
Kate reported that, “Nolan received a package from Mr. Agnos and we were all speechless. Art, you went above and beyond with that gift! Nolan’s jaw dropped and his eyes filled with tears, as did mine. We will be forever grateful to you for the time and thought you put into that amazing gift!”
She continued, “I cannot say enough how thankful we are for this amazing Coats’ Disease community. This is a gift he will treasure for a lifetime!” The globe is inscribed: “Nolan, I was very proud of you for your superb speech at the JM Coats’ Disease Foundation meeting in San Francisco. You were the best speaker. Your words are especially important to kids and their families who need help defeating this disease. Never give up.” 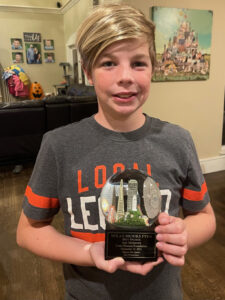 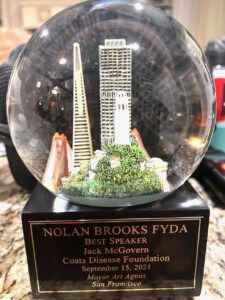 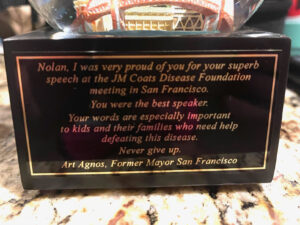